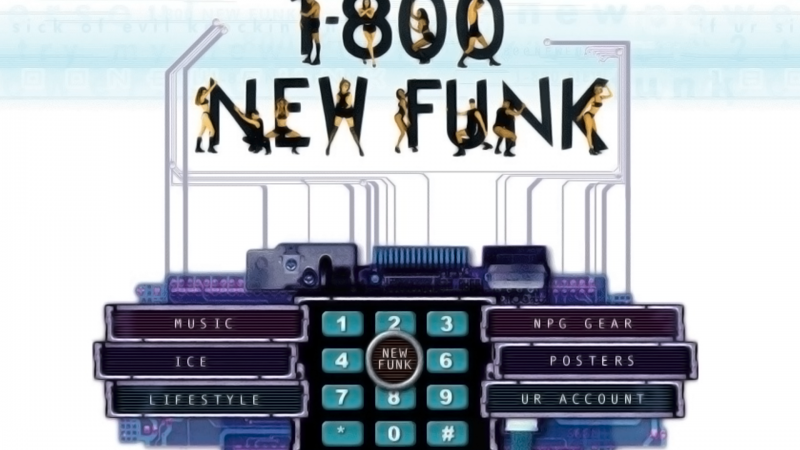 1800Newfunk.com was Prince’s official online retail store from 1997-2001. It had started out offline with the NPG Retail Stores in Minneapolis and London beginning in 1994. Once Prince had changed his name and gone independent, he wanted to establish a direct retail channel to his customers. The 1-800-NEWFUNK phone line soon followed where fans could call and place orders from a rich catalog of NPG retail. In 1997, he took it online and began taking pre-orders for the Crystal Ball CD Set, becoming one of the first artists to distribute music exclusively online. By 1999, the site was filled with CDs and merch from Prince and his independent catalog. The stores were gone and everything was handled through the site or the phones.

Sam Jennings was responsible for the design in 1999 and 2000. Here is what he had to say about the experience:

What direction were you given for the site?
The site was redesigned in 1999 to reflect a tech look and feel that went along with the “cyber” vibe at the time. Everything online was new and being created as we went along. The new “cyber” frontier was wide open. I wanted it to definitely use the artwork from the 1-800-NEWFUNK CD, because I loved the people around the characters. I wanted a consistent brand image from CD to the site. And I loved the idea of going along with the 1-800 theme and having phone buttons to press. The site was named after a phone line so it made sense at the time. I don’t think consumers in 2016 quite get ordering by phone. But back then putting your credit card online was still a very new concept to some people. So I liked bringing in that familiar phone element. Mix that with “The Matrix” and you get the site design!

We did a redesign in 2000 to take on a mobile phone vibe before we closed this site in 2002 and moved everything to the NPG Music Club.

Who helped you with the site? What was the process like?
I did get some design help from Steffen Bieker and Alice Männl who designed the sub menus. Kathy Adams had designed a first version of the site and started the phone number button idea. I worked closely with Prince’s retail staff to make sure everything was dialed in. We were using Gage at the time so it had to work with their shopping cart. But other than that I was given a lot of free reign.

What was your number one goal for the site, and how close did you get?
To make it as easy as possible to buy the merch. Fun, funky home page. Dead simple product pages. I think it came out great.

What was you favorite and your least favorite part of the site?
I loved the buttons and real world feel. Skeuomorphism is frowned upon these days by the design community, but it was immensely popular in 1999 when people were still adjusting to life online. I do wish we had bigger images for the products. We were limited in our resources and bound by dial-up speeds so product images were on the small side.

Why did the site close?
In 2002 we decided to consolidate everything in to the NPG Music Club. The phone line was closed anyway and everything was done online. It was time.