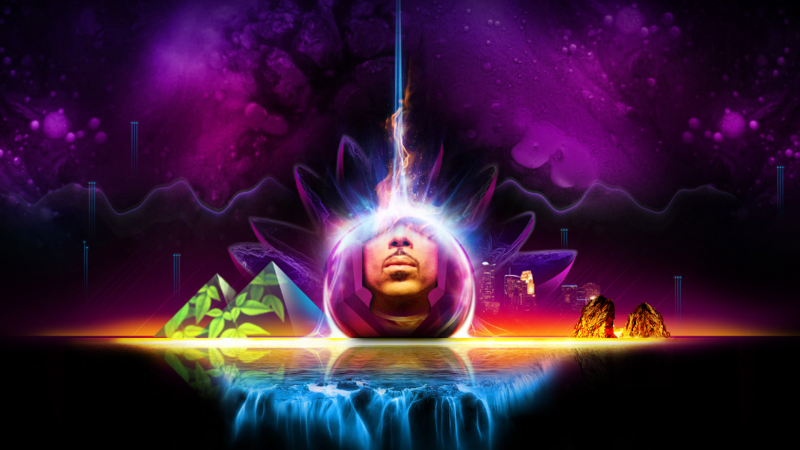 In 2009, Prince came back online after a brief break following 3121.com. This time his web experience was directly tied to the release of his Lotusflow3r 3-CD Set, with vibrant 3D imagery and animation connected to the music and the album design.

Scott Addison Clay was the Webmaster behind Lotusflow3r, and this is what he had to say about the experience:

How did you get the gig with Prince?
My involvement came through a mysterious call from my great friend and former roommate, Richard Furch. I knew he was engineering music for Prince. He called one day and said, in his German accent, “Can you make things move on the internet?”. I took him at his word, thinking animation or something, but after I said I could, he said, “Prince wants to meet you.” Then I realized he meant Prince’s definition of “move”.

At the time I had just built the site for Twilight as a director of interactive at a major marketing agency, The Cimarron Group. The night we met, I showed Prince that site, and we had a long talk about many points about life, religion and the music industry. He had me work on a few small projects until the wee hours of the morning with Morris Hayes via my laptop. I guess he was pleased as the next night, I found myself working on what would become Lotusflow3r.com.

What direction were you given for the site?
Direction came in the flavor of a listening session, a tour of the internet, and a private concert. I took my designer, Anthony Malzone, with me to talk with Prince about the site. After having me read from the bible, passionately discuss upending the record industry, perusing YouTube videos of Grace Jones, and searching Google for Miles Davis covers, we adjourned to his bedroom to listen to his newly mixed Lotusflow3r album.

Song 2 – Boom talks about another galaxy, and with Prince’s otherworldly guitar solos, we started talking about creating another galaxy. Anthony immediately started sketching planets that we could travel to each containing music. Prince really dug the idea and we just kept rolling from there. Later I came up with the idea of a cliff littered with pieces of the past as a way to tease the future site and release pieces at a time. We talked a lot about Myst and getting some mysterious puzzle elements into the cliff and simple elements in the galaxy. He loved the design so much, he had us fashion it into the album art, t-shirts and posters.

Who helped you with the site? What was the process like?
Anthony did all of the heavy design work. We partnered with Union Studio on the animation and the Flash build. Mark McBride wrote the backend. We hired Joyent for the servers. I worked with Rogers and Cowan on publicity. That was a trip as Prince wanted me to spread the word about our site and what we were doing to as many press outlets as possible. We also worked on getting him on Ellen and three of Leno’s initial final shows. When we had our first demo ready, Prince had me set up a party at the 77 Beverly Park house to show fans and press.

What was your number one goal for the site, and how close did you get?
The first goal was to create a digital galaxy as a way to release all three of the Lotusflow3r albums and start a new fanclub for the fams. We definitely crossed that mark.

What was you favorite and your least favorite part of the site?
It may not have been the easiest UI to deal with, but I liked the idea that we could enter the crystal ball of Prince and explore a 3D sphere of videos and photos from throughout his career inside his ‘brain’. My least favorite was the ticketing engine. A week prior to launch, he announced to a small dinner party that he wanted to do the three Leno shows, put on three shows in one night, and sell tickets through the website. McBride and I worked to code that part of the site while simultaneously finishing up the rest of the site, get the concerts off the ground, and coordinate with the TV shows’ producers.

Do you have a memory with Prince that really stands out?
Oh man, so many. My favorite though is when he decreed me the “Master of Ceremonies” at the press and fan sneak peek party we threw for the site. He called me to the stage to sing “Play that Funky Music White Boy” and then looked at me in disbelief when I rocked it out.

Why did the site close?
In a word. Controversy.

If you could do it all over again, what would you do different?
Probably not promise as much to the fans. I believed that we would do all the things we talked about doing with Prince, but not all of it came to pass. He was a dreamer, it’s true. Conversely I would have liked to have figured out how to make more of those dreams come true.