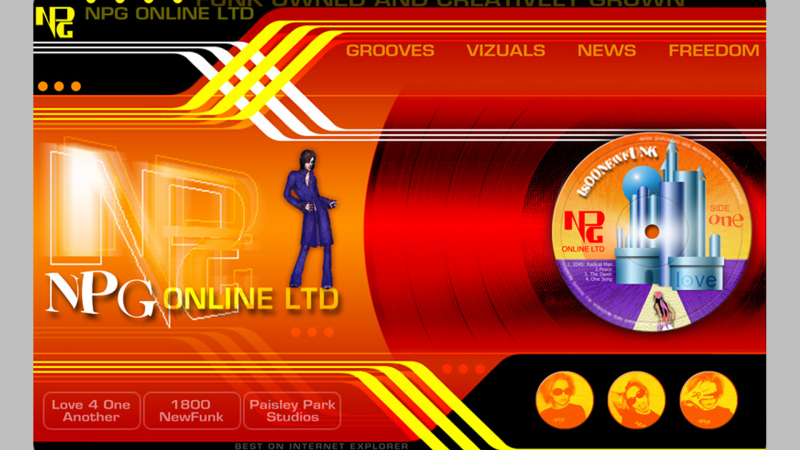 After Prince closed the Love4oneanother.com site, a new site was opened in 2000 that focused more on Prince himself instead of the charity. The site had a more direct connection 2 NPG Records and what Prince wanted to talk about regarding the music industry.

Sam Jennings was once again behind this site and has this to say regarding this experience:

How did you get the gig with Prince?
I had been working on Love4OneAnother.com, and when that closed, Prince pulled me aside and wanted to start something new. This was really the start of our direct working relationship one-on-one. I had done a lot in the previous year, but now I was locked in for the long-haul.

What direction were you given for the site?
Music. Love4oneanother.com was focused on positive messages and charity. This new site was going to be all about Prince and NPG Records. I got this idea for using a spinning record as a menu design and ran with it. Prince dug it and wanted to include a kind-of future utopia on the records label.

Here is what Prince had to say in a message we sent out at the time, “It’s my hope that NPGonlineLTD.com will become a place where all creators who seek and desire true artistic freedom will come and express their views. The voices of change r always welcome here.”

Who helped you with the site? What was the process like?
This was mostly a solo affair on my end. I ran everything by Prince but I was given a lot of leeway to come up with ideas and concepts. Debi McGuan contributed the illustrations of all the people. She was Prince’s clothing designer at the time and he asked her to come up with some “NPG Members” to populate our site. Her illustrations had already been used on the Exodus and New Power Soul album packages and her style was definitely part of the brand at the time. She sent me about 20 different people that I integrated in to this site and the NPG Music Club too.

What was your number one goal for the site, and how close did you get?
This was kind of a transition phase for Prince. We really began the discussions of how to make a legit online music business with this site. In a way it was like an incubator for what would become the NPG Music Club. There was a sense that anything was possible so what were we going to do? For its brief existence we managed to make a fun little site that paved the way for what was to come.

What was you favorite and your least favorite part of the site?
I loved the colorful, funky vibe of all of Debi McGuan’s characters. My least favorite is that the site looks so small by today’s standards. You have to remember that the web in 2001 was still mostly a 640×480 affair, while today is double that. So our content window does look kind of tiny in 2016.

Do you have a memory with Prince that really stands out?
My working relationship was getting stronger during this time as he trusted me more. I got to shoot some photos of his concerts and him onstage that were very exciting. Still, the best was yet to come.

Why did the site close?
The NPG Music Club took over.

If you could do it all over again, what would you do different?
I wouldn’t make it so small. But it fit the times.