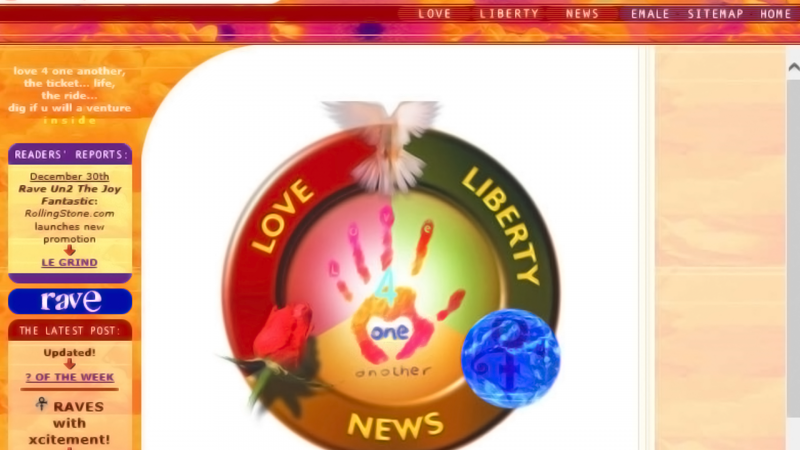 Love 4 One Another was Prince’s official website from 1997-1999. Its original intentions were centered around Prince’s charity at the time, Love 4 One Another, though over time it evolved in 2 everything Prince-related (who was still going by the Symbol at the time). At the end of 1998, Prince wanted 2 revamp the site and enlist a team of fans 2 help out. Prince was in a very independent phase in his career where he had little 2 no industry support. His tours were always popular, but his musical output after Emancipation was similar 2 an underground artist – popular among hardcore fans, ignored by the mainstream. His official website during this time would follow that vibe by focusing on positivity and uplifting messages and eschewing the expected trappings of a typical band website. The group of fans enrolled 2 recreate the Love 4 One Another site were commonly referred 2 as “The Collective” and represented a diverse group from all over. This resulted in this version of the site which was up and running starting January 1, 1999.

Kathy Adams, the main person behind the site starting in 1997, says, “The main goal was to inspire, and Prince pretty much allowed free reign with that. The site mixed inspiring pieces with Prince news and other news blurbs designed to take the mind and spirit higher: using the internet for GOOD. And I loved this about it (and still do).”

Sam Jennings, the Webmaster 4 the site, had this 2 say about the experience:

How did you get the gig with Prince?
This was my very first project for Prince in what turned out to be a 9 year experience. I was doing web design professionally already at the time in Chicago, and I had been using those skills to build fan websites and organize fans in Chicago. I was eager to meet the Prince online community and quickly made connections all over the world through IRC chat, AOL chat, the PPML, and other fan circles. I believe Love 4 One Another had made a previous attempt at organizing fans and it hadn’t gone so smoothly. But there was a second attempt with a smaller team and I was asked to participate by Kathy Adams, who I had interacted with a bit online.

What direction were you given for the site?
Positivity. It was all about love and light. I tried to pull in a lot of bright, vibrant colors to give the site a uplifting vibe, very similar to the NPG band’s style around Exodus.

Who helped you with the site? What was the process like?
We had a couple other designers on the site but I am unfortunately forgetting their names. It’s been 18 years! If they are out there and can reach out, email me!. We also recycled a lot of the content from the earlier version of the site, so there is some definite inconsistency with the design of the site. Kathy Adams remained in charge of content and handled a lot of the writing and charity work. Pierre Igot ran the news site and contributed written commentaries.

Other people in The Collective were Opnmind, TheTruth, BluOracle, Ransom2mil, and many more. Before the site launched, we would talk for hours and plan out what to put on the site. NPG2000 was the Paisley Park rep. Was it Prince? Sometimes I bet it was. But you never knew for sure.

What was your number one goal for the site, and how close did you get?
As Kathy Adams said, “The main goal was to inspire.” My goal was to deliver a site that fit with Prince’s brand at the time and create a great experience for the fans.

What was you favorite and your least favorite part of the site?
I loved the colorfulness of the site, and the open attitude about design. Anything was possible. I didn’t like the inconsistency of the site. It was kind of all over the place. And digging through it in 2016, there is SO MUCH I would structure differently. But by 1999 standards, it was alright.

Do you have a memory with Prince that really stands out?
My best memories with Prince came years later during my work on the NPG Music Club. But we did feel like a part of his world at the time, and that was a fun experience.

Why did the site close?
On January 1, 2000, Prince wiped the site clean and replaced it with “One Song”. I believe it had everything to do with the year 2000 and a sense of rebirth and renewal for the new millennium. That was the energy around that time in the world. Let’s start over! But that led to Prince pulling me aside and starting work on our next project together, NPG Online LTD. And the rest is history.

If you could do it all over again, what would you do different?
This was the start for me. I didn’t know it at the time, but there was a lot more Prince work in my future. So I guess I wouldn’t change anything because it lead to all that was to come.