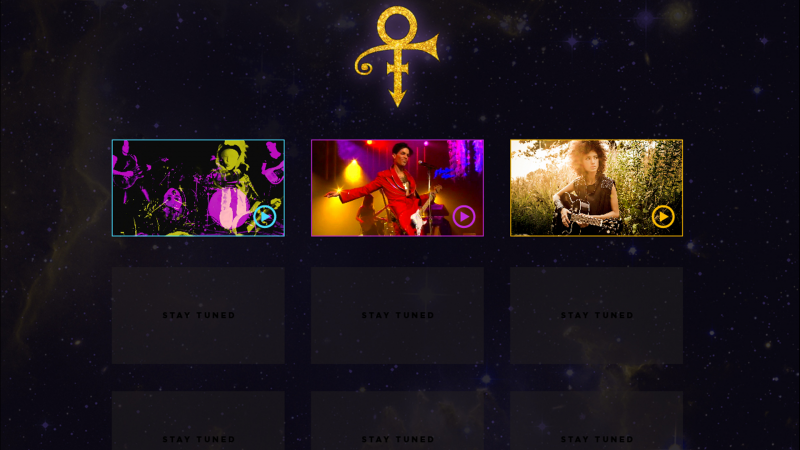 Around the beginning of 2013, Prince once again started to venture back online after a long break. By now digital distribution of music was well established and streaming was beginning to dominate, but Prince once again was looking to go a different route. This site was short-lived but once again it showed his commitment to seeking independent alternatives to the status quo.

Jason Franzen was the creator of the site, and this is what he had to say about the experience:

How did you get the gig with Prince?
Toward the end of 2012, a family friend of mine reached out to me about a possible project for Prince. My friend, Scottie Baldwin, had worked with Prince running front of house sound for multiple tours. Scottie was talking with Prince about the potential for releasing music and videos directly – bypassing iTunes and physical distribution – and he thought I might have some ideas on how it could work. My design studio (based in Dallas, TX) has designed quite a few mobile apps, and I was asked to put together a proposal.

I had never worked with Prince before and was a passionate fan since 1983, when I was 13. It was always my dream to work on something at Paisley Park and this was my chance. I spent about 2 days putting together a spec and mock-up for what I called ONE GIG. The app platform would allow Prince to directly release music and videos through the app – fully bypassing any existing platforms or distribution friction. I sent the initial sketches and presentation to Scottie who shared them with Prince just 2 days after he had posed the question. I think the speed impressed Prince and I was asked to come to Paisley Park to present the idea directly. I was on a plane within hours and not more than 4 days from the initial inquiry, Scottie and I were walking into the conference room upstairs at Paisley Park.

Prince’s banker was there and he wanted me to explain the financial benefits of the ONE GIG platform, which I did. I then got a tour of Paisley Park – watching Donna, Ida & Hannah rehearse in the very earliest days of 3rdEyeGirl – and ended up chatting with Prince and Scottie about how the platform could work. The potential that resonated with Prince was the ability to make something and release it immediately to the world. This was the recurring theme that stuck with me over the next few months.

I went back to Dallas, and after the new year, got a note from Prince’s manager asking me if I would be interested in making a lyric video for a new song. It seemed he had moved on from the new platform concept and was focused on a new project he called 3rdEyeGirl. I said I’d be happy to work on the lyric video! A few minutes later the track Screwdriver arrived in my in-box -clearly fresh from the studio.

I created the lyric video and sent it back to Paisley Park. The next day I got a call from a “unknown” number – and it was Prince on the phone. He asked if I could come up and shoot some live footage of the band to drop into the lyric video. I packed up my studio and drove from Dallas to Minnesota the next day. I ended up setting up my design/video rig at Paisley and was on the payroll before I knew what happened.

What direction were you given for the site?
One day while working on a video, Prince stopped by to let me know a reporter from Billboard magazine would be coming by that night and he’d like me to show her the latest project – which I did that night. After the interview, Prince casually mentioned that he got them to give him a full page ad in the magazine when the interview ran. I asked him what the ad would be for and he replied coyly – “I don’t know – you come up with something.” and left. We had been trying to decide where to release the live video version of Screwdriver, so I pitched the idea of a simple stripped down website where he could sell the song and video. I suggested the web address 20PR1NC3.com to keep the site intentionally time-limited (I had learned the less of a commitment he had to make, the more likely it would be to be green-lit). He liked the idea, and only then let me know the ad was due in 2 days and the site should be live 2 days after that.

The site was intentionally simple and to the point. A few video promos and the ability to purchase downloadable the Screwdriver lyric video & Screwdriver live video. We had promos for Andy Allo’s album and a teaser for a planned release of Montreaux Live – which never materialized.

Who helped you with the site? What was the process like?
No planning. No budget. Simply the need to have something live at the URL when the ad ran in Billboard. I called on two talented web fiends of mine (Chris Walters & Chris Bond) to build out the site basically overnight! They came through and again Prince was impressed with the quick delivery. From an idea to a live site in 4 days. The Billboard ad ran and the site was live just in time!

What was your number one goal for the site, and how close did you get?
As a designer, I wanted the site to be a non-designed site. It had only 1 purpose – hosting and selling video clips – and I wanted it to be completely focused on that. In essence, get out of the way and let the work be the focus. Although everything was rushed, the site was as I intended in the end. Simple. Sparse. Functional.

Why did the site close?
We had so little content (3 videos) that the site felt like an afterthought. In the canon of sites, it is likely the least complete and least impactful based on its minimal purpose and scope. I wish I had more time to build and polish the concept into something more valuable or unique. In the end, it was merely a stop-gap while the 3rdeyegirl sites were being created.

Do you have a memory with Prince that really stands out?
I have memories that always come back to me when I think of Paisley Park. The first week I was there, I setup my equipment in an unused video editing suite (right below Prince’s apartment). The room had not been used in a while and the heating was not working in there. I was working with my coat on when Prince came in and apologized about the temperature. He said he’d get me a space heater from upstairs until they got it fixed. 5 minutes later he walks in carrying a space heater! He plugs it in next to me and walks out. All the while I’m thinking – really? Did Prince just bring me a space heater from his apartment?

My favorite memory though, will be one I cherish the rest of my life. We had finished shooting the raw material for a video for Xtralovable late one night (as in 3 am). I art directed and shot the video with Prince, his dancer LaLa, and some of his horn section. I was exhausted and asked if it was OK for me to take the footage with me to download and review instead of doing it there at Paisley. He said sure and I could not come in the next day since it had been a grueling shoot day.

After a few hours sleep, I spent the next day cutting together a rough of the whole video on my laptop. I came in the following day and told him I had a cut for him to see. We sat together in the dark editing suite and he watched the whole thing without saying anything. He immediately left. 5 minutes later, he brought everyone in the building into my studio – Hannah, Donna, Ida, Trevor, Joshua, Kirk, LaLa and a few of the horns. He nodded at me to play it for them.

When it was over, he stood up and gave me a standing ovation. He clapped and gave me a playful “Hercules! Hercules!” (from The Nutty Professor movie). He liked what we did so quickly and told the room, “That’s how we do it. Idea to finished in hours.” After everyone left, he hung behind and told me “I have some notes.”, smiled and left.

If you could do it all over again, what would you do different?
For the 20PR1NC3.com site, I would have been more aggressive with proactively adding content and building out the site’s functions. At the time I was too cautious and careful and I only learned later how much he appreciated taking the initiative. I could have evolved the site into a really powerful platform like the ONE GIG concept if I had only pushed harder. I learned to never wait for permission. Follow your instinct and act.