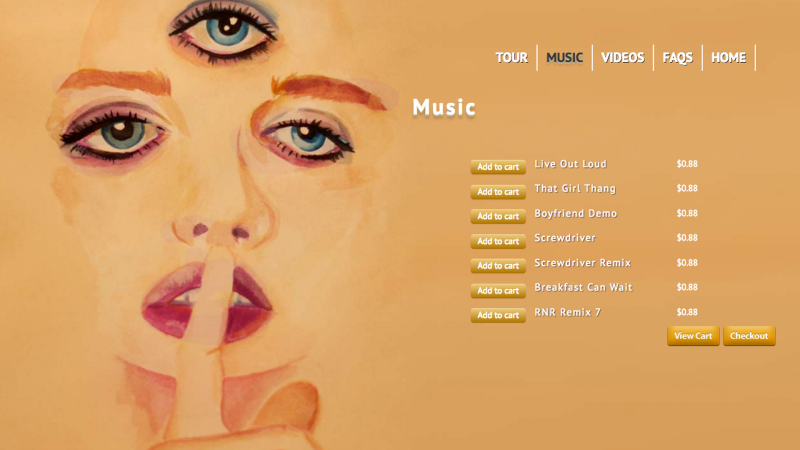 In 2013, Prince created a site around his new band, 3rd Eye Girl. This was another example of choosing to bypass traditional channels and go his own way. The site went through some changes, and he added 3rdEyeTunes.com at one point, but this is the version that started the experience.

Dave Meyer was the main person behind the site, and this is what he had to say about the experience:

How did you get the gig with Prince?
We’re fairly well-known in the Twin Cities and got the referral via Prince’s banker – one of our clients works with her often and recommended us. I got a call the Thursday before the Super Bowl from Prince’s manager, saying that her and Prince had reviewed our work and had a special project they’d like our help with. Prince wanted to sell tracks and videos directly to the public and avoid iTunes to do so. The only catch was that it was going to be a tight turnaround. VERY tight, in fact: They wanted the site live by Monday.

What direction were you given for the site?
The only direction for “Project Screwdriver” (as it was first internally known – named after one of the first tracks released) was the tracks we were going to post, and the 3rd Eye Girl logo. Everything was very secretive – especially at first – and there was no mention of Prince or any affiliation on the site or social media. we provided the direction and kept everything incredibly simple due to the tight turnaround and the single-purpose nature of the site. After a day or two we changed the site so it would display a warning for mobile devices since you couldn’t download tracks or videos directly to your phone or tablet. This was when mobile-responsiveness was brand new. We chose WordPress so the team at NPG Studios could update the site as they wished, but in the end BizzyWeb made all the edits to the site.

Who helped you with the site? What was the process like?
We completed the site internally, and worked primarily through Prince’s manager. Since we were dealing with large files (audio tracks in the 30+MB range, and videos well over 100MB), we built a server that would “auto-spawn” additional load-balancing servers as demand spiked. The way the site worked was that we would receive word from Prince that a new track was coming at around 9 or 10 p.m., and then it would take a few more hours — sometimes several — to get the final version. There were quite a few times when the tracks needed to be pulled down and/or changed because they went through a new edit. It wasn’t uncommon to get final approval and the final track after 4 a.m. Andy on our team was the mastermind of all the technical details, and made a great site with the direction and limitations we had.

What was your number one goal for the site, and how close did you get?
The biggest goal was for the site to keep interest going and to have it pay for itself. It covered all costs within a month via 88 cent downloads for MP3s and $1.77 for video files.

What was you favorite and your least favorite part of the site?
Favorite was the immediate reaction from fans – Prince would tweet from the 3rdEyeGirl account and we’d get as many as 100,000 visitors within the next hour. Least favorite was the extreme limitations we had visually – the site definitely wasn’t our best work as it was very stripped-down and functional.

Do you have a memory with Prince that really stands out?
The weekend of launch was intense. We had 3 days to get everything up and going, and a big part of the go-live was setting up the load-balancing server. Everything was all set on Monday morning, but Prince tweeted 10 minutes too early and the server crashed so hard that we couldn’t get it back up for 30 minutes. Every time we rebooted the crush of traffic immediately brought it back down. That may have been the most terrifying half hour of my life 🙂

Why did the site close?
Prince wanted to add ticket sales, and another partner had experience with that side. Late nights were getting pretty old and we’d had lots of fun, but it was time to let it go… and we demurred on developing phase 2.

If you could do it all over again, what would you do different?
I’d have really liked to have met Prince in person. The only conversations we had with him were via his manager over the phone (phone tag: He’d say something, which we could hear, and we’d have her answer for us). We’re local and I offered to drop by Paisley Park one day, but he wasn’t around.