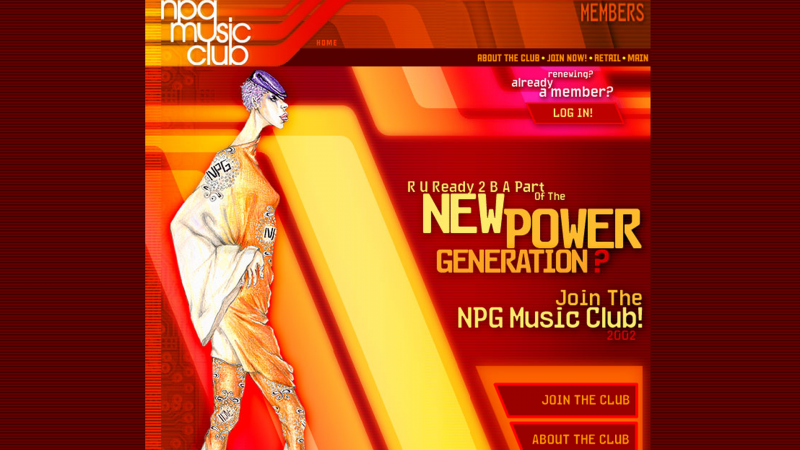 IN 2002, The NPG (New Power Generation) Music Club evolved into its next phase and began year two. The MP3 download service was discontinued, and the Members instead were offered four CDs that were sent to them in the mail. The best Prince Concert tickets continued to be available in exclusive presales for the Members as well. NPG Retail merged with the Club that year, and everything was consolidated in to the NPG Music Club for good. From this point, the NPG Music Club was the one and only place for all things Prince.

It was during this time that Prince invited NPG Music Club members in to the soundchecks during the One Nite Alone Tour, often participating in lengthy Q&A sessions. Members of the Club posted their reviews of these shows on the Music Club site, with many featured in the Box Set Package for the One Nite Alone… Live! Set.

What direction were you given for the site?
The design of the 2002 version of the NPG Music Club was an evolution of the 2001 version. We expanded that site in to 3 distinct sections – Members, Public, and Retail – and placed Debi McGuan’s characters front-and-center. Her terrific illustrations were supposed to be representations of the concept of a New Power Generation. Funky and diverse people who dressed their own way and were all about peace, love and freedom. It was the same concept behind her characters that populated the Exodus and New Power Soul CD packages as well. Using them as inspiration, I wanted to create a vibrant and colorful experience that was as bold as the characters. I liked the idea of having a large, main figure represent each section as well.

What was you favorite and your least favorite part of the site?
I loved the bright colors that really vibrate in this version. It felt very connected to the NPG experience in my eyes. Having Debi’s illustrations so prominent set a bold tone that I loved. My least favorite thing is that we could have had more content. We had so much music flowing through the site in 2001, it was an adjustment when we shifted to CDs for this year. It didn’t have that same monthly energy.

Do you have a memory with from this period that really stands out?
I do remember meeting so many fans at the Celebrations and on the tours. It was so wonderful to meet people face-to-face at the shows in all the different cities. It really put a face to the people who were a part of this experience and strengthened that sense of community. It was a thrill to be able to look out at whole section of Prince’s shows and know they were all there because they were members of the Club.

Why did this version of the site close?
In 2003 we decided to go with the full-on “Estate” experience instead of the straight-forward website. Prince loved to change things up all the time. We closed the site for a minute to reboot, and then fired up year three.

If you could do it all over again, what would you do different?
The CDs we sent out didn’t exactly fill the members’ expectations. I remember there being some controversy around that. To help smooth that over, Prince released the Xpectation album download and that helped. But if I had to do it over again, I would have tried to gauge expectations earlier and convince Prince sooner that we needed to do right by the Members.