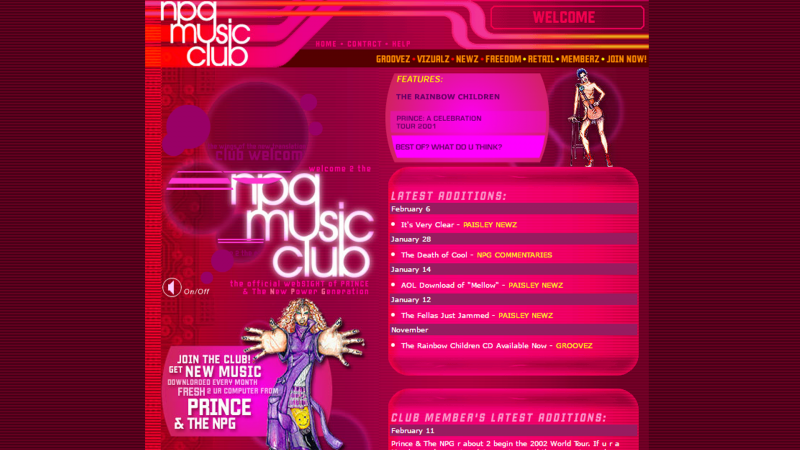 The NPG (New Power Generation) Music Club first launched with a software player/download manager. But after about a month, it was decided that the player was just a bit too complicated. Our audience was having trouble getting it to work, and it was turning in to a real headache. So instead we decided to launch a simple web interface instead with a straight-forward MP3 download structure. Members could now log in to the members-only website and just click a link to an MP3 or MOV file and be done.

The NPG Music Club started out as a subscription-based music club. A fan could join up for one month for $7.77 and get around 3 new MP3 song files plus an MP3 “Ahdio Show” (essentially an hour-long podcast before there were podcasts). Or they could pre-pay for a whole year and become a Premium Member. This level of membership got you even more downloads per month, plus access to presale tickets and other perks Prince would throw in along the way. The volume of unreleased music that Prince distributed through the Club during this time was unprecedented for a mainstream artist. Live tracks, music videos, hours of NPG-hosted “Ahdio Shows,” and over two albums worth of previously unreleased songs all flowed through the Club during this time.

Sam Jennings founded the NPG Music Club with Prince, and here is what he had to say about this experience:

How did you get the gig with Prince?
I was already working with him on Love4oneanother.com, 1800newfunk.com, and NPGOnlineLtd.com. This was the next step in our working relationship.

What direction were you given for the site?
After we moved off the downloadable player and made it just web-based, the art direction was an evolution of the style we had started in NPG Online LTD. Debi McGuan’s illustrations continued to play a big part in this version of the Club. But the emphasis was simplicity. Get the fans their music as easy as possible.

Who helped you with the site? What was the process like?
This was mostly another solo affair by me as far as the design and HTML went. I had great illustrations by Debi McGuan to populate the site with. And of course the fantastic content from Prince and the NPG. The Ahdio Shows and music were often given to me directly by Prince’s engineers, straight from the studio.

What was your number one goal for the site, and how close did you get?
The NPG Music Club was all about connecting Prince directly to his audience with no middle-men. During 2001 especially, we got an amazing amount of music out to his fans in a clear channel that had zero connections to the established music industry. It was truly a ground-breaking experience.

What was you favorite and your least favorite part of the site?
My favorite was the amount of fantastic music. My least favorite, that we didn’t do the simple web interface like this from the beginning.

Do you have a memory with Prince from this period that really stands out?
During 2001 the memory that really stands out is the time we had an NPG Music Club launch party in Miami. Lenny Kravitz showed up to the nightclub that was hosting the party for us, and he was talking with Prince on this balcony area. I was set up on a different part of the same balcony with the computers, showing everyone what was up with the club. I look over to where Prince and Lenny are and there is this big crowd around them. Suddenly this same swarm of people starts to move closer to me, like a mini-people tornado coming my way. The crowd gets to me and opens up, and all of a sudden I am standing between Prince and Lenny Kravitz. Prince starts asking me to tell Lenny about the Music Club. So we chat for a minute and I show Lenny the computers, but I think he was there to hang and have fun, not geek out on a computer, so it was brief. But that was a funny experience from 2001. More to come in later years.

Why did this version of the Club close?
I think Prince felt the demands of 3 or 4 new songs and an hour-long Ahdio Show was too much to maintain for a long period of time. I wanted to create an advanced schedule and run it without him needing to do much. But he decided to change it up instead and go for a CD solution instead. More on that in the NPGMC 2002 section

If you could do it all over again, what would you do different?
I would try to get more music in advance so I could control the schedule better. 12 months of constant new material got a little daunting and it could have used more planning.