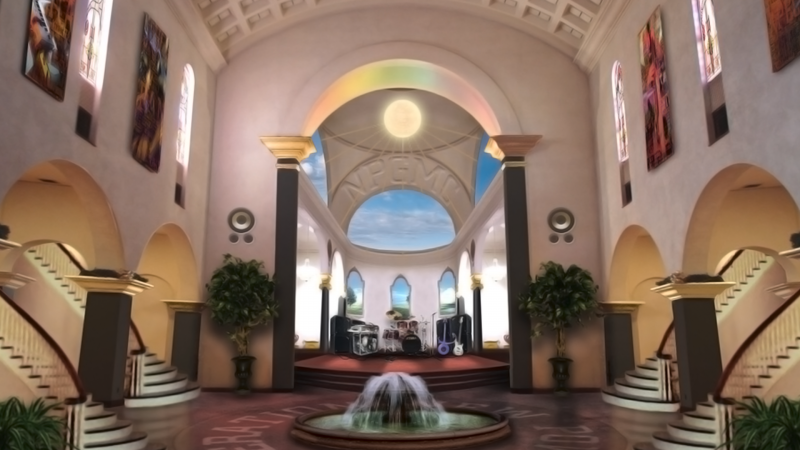 Entering in to it’s third year at the start of 2003, Prince completely revamped the NPG (New Power Generation) Music Club website and started what would become the model for the site going forward. Instead of a simple web interface, Prince created a “virtual estate” that was to be an online home to the members of the NPG Music Club. The site was presented as a series of rooms in a house to explore by clicking through doorways and hallways, with content tucked away within these rooms to be found for those who made the effort.

The business model also changed with the 2003 version of the Club. Gone were the annual subscriptions, and instead Members were asked to pay $25 for a lifetime membership. With the reduced price, music was no longer given away with your membership, but instead it was sold at a discount to members. Other NPG retail was also discounted and presale concert tickets and members-only events continued to be big draws. Listening parties were held in the Club for the N.E.W.S. CD release and other perks were thrown in from time-to-time.

What direction were you given for the site?
The inspiration for this version was very much like a 3D video game. He wanted it to be like the old CD-Rom game, Myst, but with an NPG style. The concept was very similar to the Prince Interactive CD-Rom from 1994. He really wanted it to be a virtual home where the members could hang out. Prince talked a lot about a kind of utopia where we would all live; where only positivity and our highest selves existed. I know he was very inspired by The Matrix, but instead of a virtual space created to enslave, this would be a virtual space created to uplift and connect.

I was looking at a lot of architecture magazines to find rooms that fit this vibe. Then we’d feed them in to Photoshop and make them more “Prince-like.” I spent a lot of time stripping the images down and then adding elements back in to create true virtual rooms. Each section of the site was given it’s own room, and since it was a virtual house, a new room could pop up any time.

Who helped you with the site? What was the process like?
Jeremy Gavin played a big role in getting a lot of the initial design and Flash work done. He worked closely with Prince on some of the original concepts. At first we were going to make an actual 3D space with animation and everything. Ultimately it was decided that we didn’t have the resources to create a full 3D experience that would still look good over a dial-up connection. The site evolved over time to include a “room” for each section of the site. Every once in a while, Debi McGuan’s people would pop in to the house too. Or even Prince himself would show up in a room sometimes.

What was your number one goal for the site, and how close did you get?
We really wanted to make a fun site to explore. We wanted to create something that felt unique and special; something that felt like a new way to get content on a website. It was an ambitious goal, but I think we were successful with creating a fun and new experience.

What was you favorite and your least favorite part of the site?
One thing that grew out of this version of the Club is the vibrant member community within the message boards and chat room. We hadn’t had this before, and these members’ only experiences really connected everyone in a new way within the club. It also gave me a place to answer questions about the new site, which was very helpful in dealing with the sometimes challenging navigation. That was my least favorite part about the site. It was sometimes hard to figure out where everything was. We evolved that in the next version of the Estate, but at first Prince was against any kind of sitemap or pointers to help people find things. So sometimes that got confusing. Like I said, the message board really helped make that easier.

If you could do it all over again, what would you do different?
I really like how we evolved the site in the next version of the house. If I had to do it differently, I would have started this version sooner.