The very first version of the NPG (New Power Generation) Music Club launched on February 14, 2001. The Club first took the form of a downloadable player that would act as your download manager as well as media player. The fan would install the player on their harddrive, and then by joining the NPG Music Club they would their get monthly downloads through the player. Downloads included an hour long “Ahdio Show” (essentially a podcast) and 3 to 4 new Prince songs, often with accompanying videos. However, the downloadable player version of the NPG Music Club was short-lived as it was decided that a web-based approach would work better for Prince’s audience.

To hear more about what the Club had to offer, head over to NPG Music Club v2 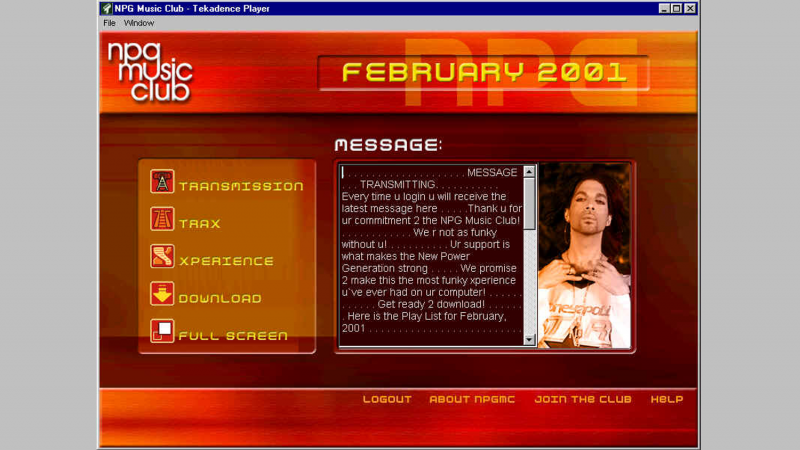 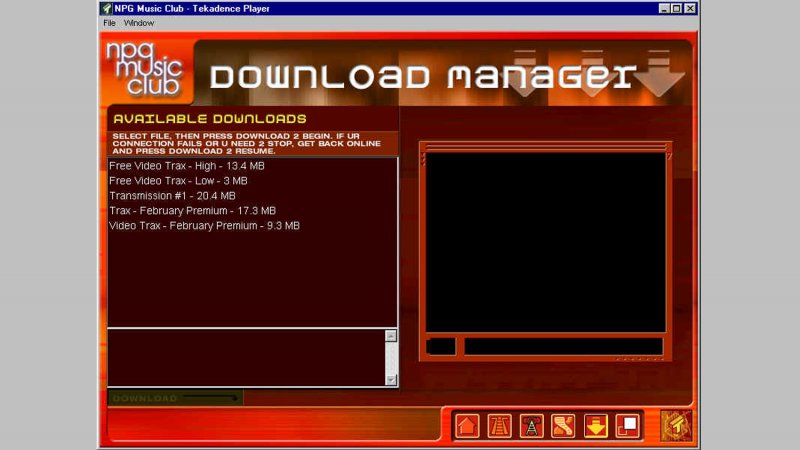 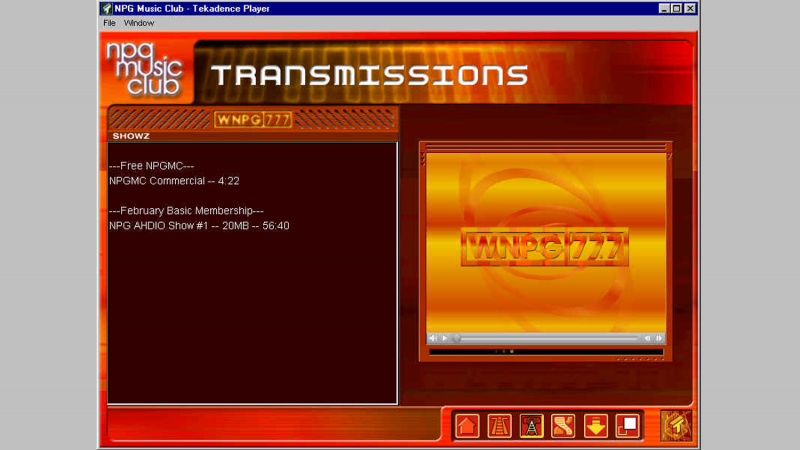 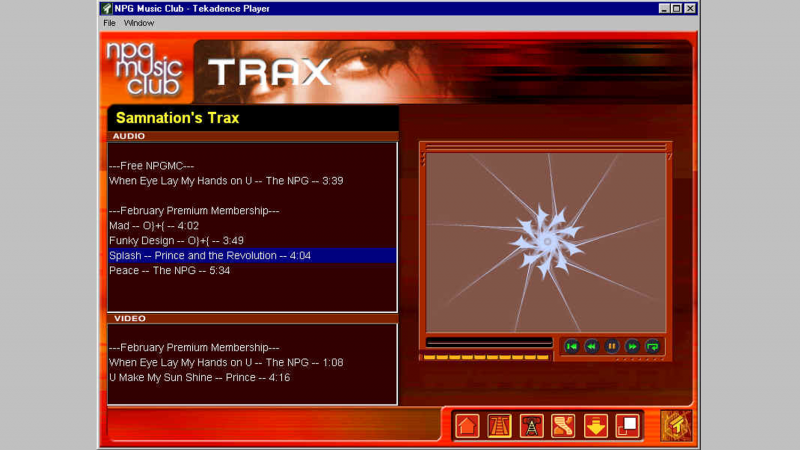 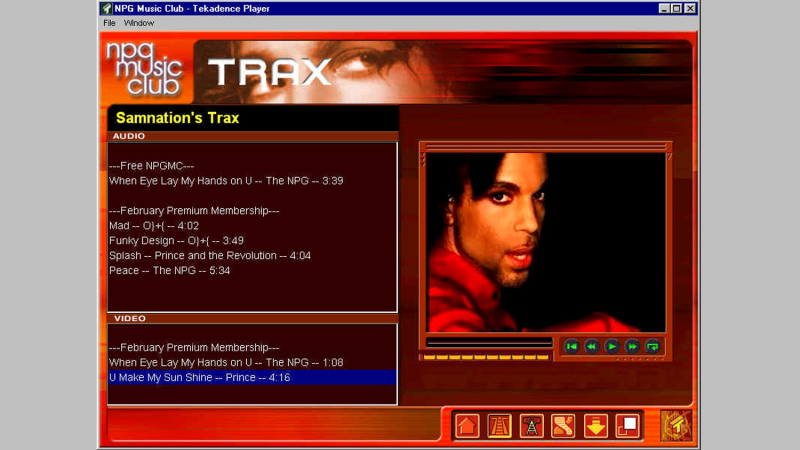 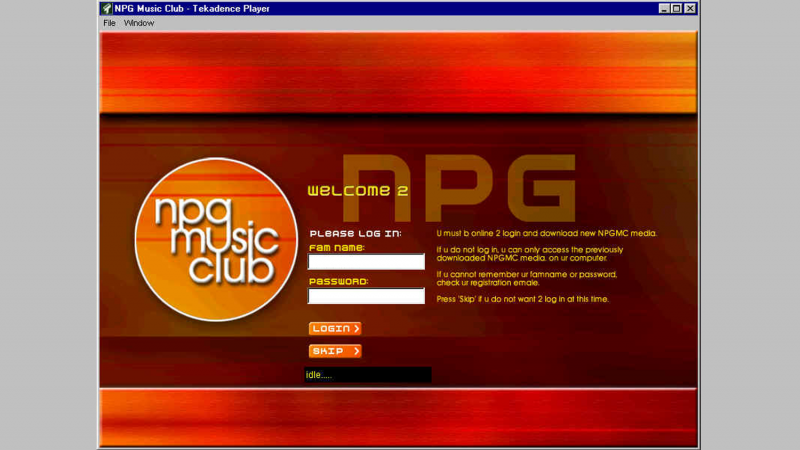 Sam Jennings founded the NPG Music Club with Prince, and he worked with the software team during this initial phase. Here is what he had to say:

What direction were you given for the NPG Music Club Player?
We had been looking for a solution for selling Prince’s music for a long time by this point in 2000. One of the companies we talked with was RealAudio, who made the RealPlayer software. They were popular at the time and they had suggested opening a channel in the RealPlayer that would be your download manager and stream all of your Prince content. One thing to remember about 2000 was that Napster was a big issue at the time so there was concern around file-sharing. A self-contained player was one option to prevent that by creating a closed system. Things didn’t pan out with Real but another company, Tekadence, said they could do it independently. We liked the idea of doing this completely independent without being in the shell of another company.

Who helped you with the site? What was the process like?
Tekadence was a software startup in California founded by some of the guys that were behind the Emergency Broadcast Network (EBN), who had done a phenomenal video/musical mash-up piece called Telecommunication Breakdown in the mid-90s. They were really in to the ideas of breaking apart digital media and creating visual art webscripts to go with them. They had some far out concepts for us that were probably a little too far out for Prince. But they loved the idea of a “Prince Player” and we dove in.

What was your number one goal for the player, and how close did you get?
Once we decided on a subscription service for the NPG Music Club, our goal was to make something that would deliver the content in one place and have it be your one-stop for all things Prince music-related. It was a great concept, and it’s interesting that today we experience music mostly through closed software solutions like Spotify, Tidal, and Apple. But in 2000 there were just too many technology limitations to get over. Plus this is years and years before broadband, so most of Prince’s fans were limited with what they could do online. If we relaunched the NPG Music Club in 2016, I have a feeling we would’ve revisited an app solution.

What was you favorite and your least favorite part of the player?
I loved the concept at the time of a Prince-branded piece of software. It was very forward thinking, but ultimately it was just too ambitious. The software wasn’t smooth and it required too much of a learning curve from our audience. Plus the design didn’t quite fit IMO. We tried to improve it but it was too little too late.

Why did the player get discontinued?
It boils down to just being too complicated. Our audience wanted simplicity, and a software player that required a lengthy installation process on a wide variety of computers just wasn’t working.

If you could do it all over again, what would you do different?
I would have skipped this part and went straight to the simple web interface. Once we did that, it was smooth sailing.